Is there a last time for “the first times”?
Our YouTube Channel is out to prove it is never too late.

At the previous 10 Zurich Film Festival, Kinga Binkowska (Poland) and Nathan Innes (Canada) met and fell madly in love. Soon after in their "hysteria" they both decided to leave their current jobs to travel the world and follow their true passions. 1 year later, on their anniversary, they enter this competition to explore their love of filmmaking and storytelling together. Nathan has worked in documentary films for the last 3 years. Kinga has M.A.s in International Relations (Poland) & Media Management (France) She has lived and worked in 4 countries, speaks 4.5 languages and can eat 5 ice creams a day. 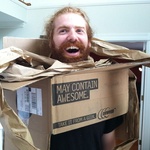